Or Give Me Death at Fifteen 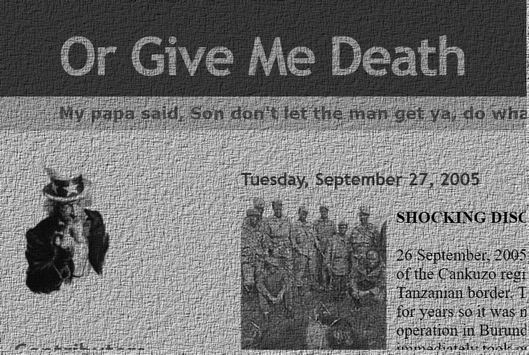 Here are some unused or variant covers from Rhodium and Sierra Blanca.

Consider this the big reveal that Hiro and Don are one and the same.

Or Give Me Death Classic

Happy 2017.  Welcome to the all-new ORGIVEMEDEATH.com.  Much more stylish than the original site, no?

The original ORGIVEMEDEATH [.blogspot.com] began as a fledgling satirical news blog in an era before fake news was "FAKE NEWS" [bum bum buuuuum].  But, as long-time readers [of which there are none] may recall, the site was plagued by constant bouts of inactivity as no new fake news stories broke. Then, in 2009, management claimed it would abandon the satire racket once and for all and move into the even more saturated market of publishing.  After almost eight years, the new OR GIVE ME DEATH Industries is born.

The "classic" stuff is all still there, under constant threat of deactivation due to inactivity.  New posts may spring up here from time to time.  Anything is possible.  But the new focus will be the books.  Instant classic indie-novelette Rhodium is still for sale (Ranked #4,683,976 on Amazon at time of print) and maybe some new special features will be coming soon.

A new Western/Cold War thriller, Sierra Blanca,  by new author Don M. Patterson is just days away from its launch.  We're building this company around the success of this title so it better be good.

And who knows, maybe we'll add some new authors to the stable.  Shoot me a line.

​Fifteen years ago, a pick-up truck was spotted in an El Paso parking lot with a bumper sticker reading “GiveMeLiberty.com”.  The aspiring, phony publisher who saw the sticker for the rambling and seemingly illegal political fundraising operation immediately wondered, “is the other half taken?”  It wasn’t.  And while financial constraints stalled the acquisition of the proper domain until 2008, OrGiveMeDeath[.blogspot.com] officially launched on September 15, 2005.

GiveMeLiberty.com is long abandoned while OrGiveMeDeath.com now celebrates its crystal anniversary. Fifteen years makes us a “legacy” website akin to Google, Twitter, or GeoCities. The internet was a different place in 2005. In that short and undeserved era of the blog, Or Give Me Death separated itself from the field of earnest logs of perspective by making up fake news - something far less controversial at the time. The site was inspired by that true institution of fake news and satire: The Weekly World News.  Truly, we lost a piece of America when we stopped receiving Bat Boy updates at the grocery check out.

To date, the most read piece on the site (and likely the most read thing ever written by this author) was a fake news gem from 2008: “1884 Adult Film Now Earliest Known Motion Picture.”  That story continues to draw clicks as it shows up in search results for the earliest known motion picture; now that’s fake news with results!

When the fake news wells went dry, management pivoted to the even more saturated market of publishing.  In 2012, the reborn Or Give Me Death Industries released its first print offering, a tight novella, Rhodium. Readers like you have helped make this cryptic book the 2,612,671st best selling book of all time on Kindle. Good work, gang.

After a couple of hit or miss fake news offerings came the first true book in the OGMD Ind. catalog, 2016’s Sierra Blanca by award finalist author Don M. Patterson. Released to some critical acclaim, the thrilling novella continues to be a selling book on the internet.

And now, Or Give Me Death Industries takes another blind leap into an overdone market, well passed peak profitability: comic books.  Freddy Reno Went Missing Issue no. 1 is available online and will be available in print on IndyPlanet.com.

Who knows what lies ahead for Or Give Me Death Industries?  There is an honest to goodnessnovel on the way and a strong probability the Reno series will be finished. Or, maybe I’ll just do nothing. This site has a proud tradition of going on hiatus. Maybe I’ll start a podcast in 2030. Until then, buy and read all of the merchandise available on this ad-free website.